Previous Next
The Discipleship Gospel  (a.k.a. The Kingdom Gospel) 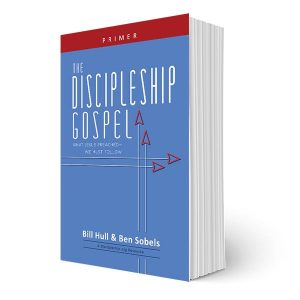 New Testament scholars agree that Jesus spoke about the kingdom of God more than anything else during his earthly ministry—more than one hundred times.[1] To explain its mysteries, he used many parables and metaphors. But to say that people today are a bit fuzzy on the meaning of “the gospel of the kingdom” is an understatement. Confusion abounds, so let’s simplify the meaning here by addressing what Jesus was asking people to do—namely, follow him as a disciple.

The way to get a handle on the kingdom and its vast claim was by repenting of sins, believing in Jesus as the messiah, and following him as their rabbi.[2] People today, too, need to repent of their sins, believe the good news about Jesus as Savior, and follow him as teacher and Lord. To join his kingdom, we must become disciples or “apprentices” of Jesus, people who actually do what Jesus did. That is why we are calling the gospel of the kingdom the “discipleship gospel.” “Discipleship”—or following Jesus—is an essential part of the good news he preached.

This is from Bill Hull and Ben Sobel’s free eBook, The Discipleship Gospel Primer. Download the eBook here in your favorite format at no cost.

The good news of the kingdom is that eternal life begins now—the moment you repent, believe the good news of Christ, receive the Holy Spirit, and start following him.[3] Those elements go together. God never intended them to be separated out (as if that were possible). The kingdom is holistic: you enter a new realm where “all things are become new.”[4] When you start following Jesus, you prove that you believe what he says. This is quite different from what is commonly taught as the gospel—that if you believe the right religious facts, you’re saved, and following Jesus is just an option. What we must teach, however, is that Jesus started with the call to follow him; his disciples, then, started believing in him and grew spiritually in stages. We defy any experienced follower of Jesus who says that growing through a gradual process is not an accurate description of their life in Christ. Life in Christ doesn’t begin with instant maturity and immediate understanding.

Our deepest human desires are revealed by our daily life and habits. The Anglican preacher and evangelist John Wesley had it right when he started out his disciples with behavior that led them to later deepen their belief. Although the original five disciples gathered around Jesus in faith, his disciples grew in their faith after he turned water into wine: “This miraculous sign at Cana in Galilee was the first time Jesus revealed his glory. And his disciples believed in him.”[5] As they followed the one who had called them, the disciples’ belief progressed from their initial belief. Simply put, we are believers first, and we form our beliefs through the practices, traditions, and habits of our lives.

Don’t misunderstand us, though. On a certain level, believing produces behavior. It must be that way; otherwise, each of us would draw the line of conversion in different places. Only God knows what true belief is—that’s why we’re not the judges. One thing is clear, as we say and explore throughout this book: Following Jesus is an actual, existential behavior that demonstrates the reality of one’s faith in Jesus.[6]

At the heart of the gospel of the kingdom is the simple question, “Are you doing the will of God?” This comes from Jesus’ message about the vital role of obedience for one’s entry into God’s kingdom: “Not everyone who calls out to me, ‘Lord! Lord!’ will enter the Kingdom of Heaven. Only those who actually do the will of my Father in heaven will enter.”[7]

This passage reveals to us that living in the kingdom is the same as being a disciple of Christ, someone who does the will of God. When you decide to follow Christ, you enter a new realm, where his will is done. Recall the prayer that Jesus taught his disciples to pray: “May your Kingdom come soon. May your will be done on earth, as it is in heaven.”[8] This passage, too, shows us that following Jesus is vital to entering into the kingdom of God. So, even in The Lord’s Prayer, Jesus taught his disciples that heaven is where God’s will is done, and wherever his will is done on earth, the kingdom exists.

The same is true for us today. We must obey God; otherwise, we don’t really understand the gospel Jesus preached. That is why the word “discipleship” is crucial—because we are following a living Christ. We appreciate the sobering words of German pastor and theologian Dietrich Bonhoeffer: “Christianity without discipleship is always Christianity without Christ.”[9] A faith that’s not lived out through action is not faith; it’s a life without Christ. Plain and simple, if you want the living Christ, then you must follow him. That is discipleship, and that’s why we call it the “discipleship gospel.”

1. Scholars like N.T. Wright in Jesus and the Victory of God (Minneapolis: Fortress Press, 1996), Scot McKnight in The King Jesus Gospel (Grand Rapids: Zondervan, 2011) and Kingdom Conspiracy: Returning to the Radical Mission of the Local Church (Grand Rapids: Baker Books, 2014), and George Eldon Ladd, The Gospel of the Kingdom: Scriptural Studies in the Kingdom of God (Grand Rapids: Eerdmans Publishing, 1959). For examples from the New Testament, see Matthew 3:2; 6:33; Mark 1:15; Luke 4:45; John 3:5.

6. James 2:14-20. In his work Salvation by Allegiance Alone Dr. Matthew Bates claims, “Faith in Jesus is best described as allegiance to him as King” (Grand Rapids: Baker Academic, 2017) 77.