“Why is every donut shop in California the same?”

That was a question I asked multiple people after moving my family to SoCal in 2015 to plant a church.  It was an honest question that came from my experience of visiting multiple independently owned Mom and Pop donut shops.

Here’s what I observed in my limited donut shop research:

When I presented these findings to locals, their response was “Isn’t that how donut shops are everywhere in America?”  Their ethnocentric view of donut shops prevented them from seeing the uniqueness of their situation.

So, I went years without a valid explanation.  Until. . . I watched a documentary on Hulu called The Donut King and the veil of ignorance was finally lifted from my eyes.

The Donut King follows the life of a Cambodian man named Ted Gnoy. Ted and his family fled Cambodia in the 70’s because of the Cambodian Civil War. They came as refugees to America and actually ended up living in a local church here in Orange County.

Eventually, Ted saved the amount necessary to purchase his own donut shop.

After achieving a level of financial stability for his family, Ted’s attention turned toward other Cambodian refugees in need of help. So, he sponsored a Cambodian family, allowed them to live in his home, gave them a job making donuts, and even helped them acquire their own donut shop.

And then he did it again.

Over the years, Ted sponsored over 100 Cambodian families and trained most of them in the art of making donuts.

As you can imagine, donut shops owned by Cambodians, all using the same recipe, multiplied across the state of California.  In fact, a recent study found that there are 5.000 independently owned donut shops in California. 4,000 of those shops are Cambodian owned and can trace their roots back to one man . . . Ted Gnoy.

That’s why he’s The Donut King.

If Ted can produce that kind of multiplication without the power of the Spirit of God and without the motivation from the mission of God, then what can disciples of Jesus do with both?

If you’re interested in finding out, here are a few principles of multiplication to get you started multiplying disciples.

1. Start upstream with the Gospel.

If the person you’re discipling believes a version of the gospel that makes following Jesus optional, then they will never multiply.  Why? They will lack the drive and the commitment to Jesus necessary for multiplication.

“Non-discipleship gospels may be advanced through various powerful forms of media, but they won’t multiply and transform lives of disciples who make still more disciples.”
– Bill Hull

If we’re going to see disciples multiply, we have to go upstream and help them rebuild what they believe about the gospel.

2. Cast the vision for a disciple making identity early and often.

“While walking by the Sea of Galilee, he saw two brothers, Simon (who is called Peter) and Andrew his brother, casting a net into the sea, for they were fishermen. And he said to them, ‘Follow me, and I will make you fishers of men.’”
Matthew 4:18-19

In one of Jesus’s earliest interactions with the disciples, he cast the vision for the 12 to not only be disciples but to be disciple makers . . . fishers of men. If I’m being honest, I think Jesus cast that vision way too early, right?

Shouldn’t he have waited until year 2 or 3 when they were more mature?

He did it from day one.

I’m sure they didn’t fully grasp what he meant by that statement. How could they? Even still, he placed a vision of an identity in their minds that he would shape over time.  In the future, he would use other identity words like “laborers” and “witnesses.”  And I think he used these identity words on purpose.  Because he wanted them to be disciple makers.

He wanted them to embrace the identity. To put on the name tag of disciple maker and feel the weight and responsibility. To know this wasn’t what they did, but who they were.

If the people we are discipling are going to multiply, we have to cast a vision for a disciple making identity early and often.  They may not understand it in the beginning. It may seem overwhelming to them. But, eventually, they will begin to embrace an identity that has been passed down to them from their Lord.

3. Lead disciples to be others-focused.

A disciple who’s focused on self cannot multiply.  There’s not enough energy and time to go around to reproduce another disciple.

“Then Jesus told his disciples, ‘If anyone would come after me, let him deny himself and take up his cross and follow me. For whoever would save his life will lose it, but whoever loses his life for my sake will find it.’”
Matthew 16:24-25

In discipleship, we’re not leading people to become better versions of themselves.

We’re not leading them to add another trophy to their trophy case of self-improvement.

We’re leading them to die to self and become others-focused.

So, as you make disciples, be sure that you’re not only filling their minds with information. Rather, be intentional about placing them in situations where they learn to care for others more than themselves.

4.  Help disciples commit to a mission, not a method.

You’ve heard this before, “Methods change, but the mission remains the same.” I’ll say this at the risk of upsetting a few people.  But, our mission is not to multiply D-groups, or triads, or any other group.  Our mission is to make disciples.

5. Disciple disciples as they multiply.

Honestly, this is where I’ve totally blown it multiple times.  I’ve spent large amounts of time investing in an individual. Seeing them grow in maturity. Helping them develop their personal walk with God. And then I said, “Ok, go out and multiply.”

And guess what?  It didn’t work.

Jesus didn’t do this. He discipled his disciples while they were multiplying.

Think about it. He would send them out in pairs and then have them come back and report to him. He gave them on-the-job training where failure was a possibility, but he was also there to support them.

Discipling another human being is difficult work. There are ups and downs.  Successes and failures. Your disciples need your support and your wisdom as they disciple others.

Be there for them. You’ve walked beside them throughout their journey. So, walk beside them when they start investing in others.  You’ll be glad you did.

This post originally appeared at: Donuts & Disciples — The Bonhoeffer Project Jesus’ disciples, then and now, are characterized by both trusting what Jesus promised and being trustworthy themselves.  I’ve chosen to relate these… The role of the Senior Minister/Pastor is the most significant role of all in creating a disciple making church. I do not… 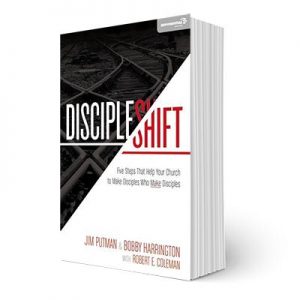 The following is an excerpt from The Kingdom Unleashed Sampler. Download this free eBook here. Another barrier to prayer (in addition to what we… In recent years many of us in church leadership have begun paying attention to what is happening in Disciple Making Movements (DMM). … The beginning of the new year is a great time to think through your life. It is a good time to take…